Born and raised in Guelph, Ontario, Thomas Collins was ordained a priest in 1973.  He considered other paths, but was inspired by a high school English teacher who suggested he should consider the priesthood. He earned undergraduate and master’s degrees in English, later pursuing theological training in Rome.  Specializing in the Book of Revelation, he earned his licentiate in sacred scripture from the Pontifical Bible Institute and a doctorate in theology from Gregorian University. He was named Bishop of St. Paul, Alberta in 1997 and Archbishop of Edmonton in 1999.  Pope Benedict XVI appointed Archbishop Collins as Archbishop of Toronto in December 2006.  On February 18, 2012, he was elevated to the College of Cardinals in Rome.  Cardinal Collins was one of 115 cardinal-electors to participate in the 2013 Conclave in Rome, where Pope Francis was elected to succeed Pope Benedict XVI. 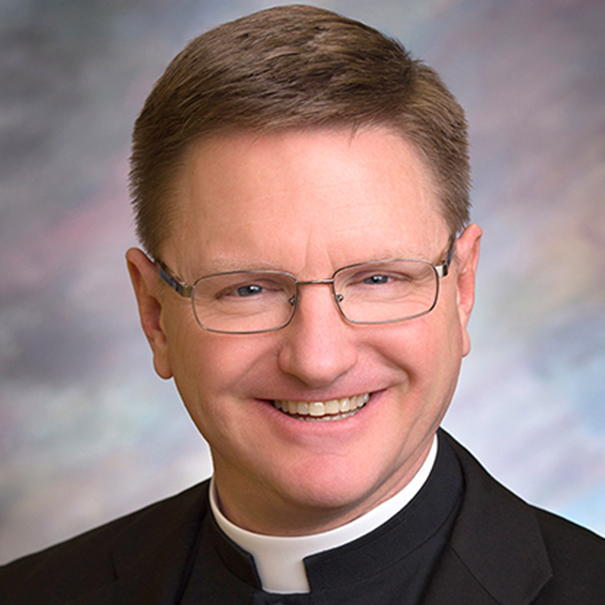 Rev. Brian P. Christensen is a native of Long Island, NY.  After graduation from the US Air Force Academy in 1987, he earned an M.A. at Middlebury College and the University of Paris.  He completed Pilot Training at Williams Air Force Base in Arizona and flew B1-B Bombers for four years.  His years of military service “landed” him in western South Dakota.  Finally acknowledging God’s call in his life, he entered seminary at the Immaculate Heart of Mary Seminary in Winona, MN.  He attended the North American College in Rome prior to being ordained a priest of the Diocese of Rapid City in July of 1999.  After ordination, Fr Christensen served as the parochial vicar at the Cathedral of Our Lady of Perpetual Help, Chaplain of Catholic Schools, and Chaplain of the Rapid City Newman Center.  He continued his theological studies at the John Paul II Institute for the Study of Marriage and Family at the Catholic University of America.    He was appointed Director of Vocations in 2003 and served for eight years in that position.  For four years, he assisted with the NCDVD New Vocation Directors Workshops during the annual convention.  Fr Christensen served as the Vice Rector for Seminary Life and the Director of Human Formation at the Pontifical North American College from 2014-2017.  He has served as pastor for eleven years, including his current assignment as pastor of the Cathedral of Our Lady of Perpetual Help.  Additionally, he is the Diocesan Director of Formation for the Permanent Diaconate.  He enjoys the outdoors including hiking, camping, and hunting.